The Job of a Pizza

When I first started discovering the Jobs to be Done way of thinking, it blew my tiny mind.

The depths to which you could dive into this process were immediately obvious, and the surface was simple enough to make you leap.

For those of you who haven’t the foggiest what I’m going on about, Jobs to be Done is way of defining what your customers want from a product – or to use the terminology: what jobs a product is hired to do.

You’re only a Google away from loads of information, so I won’t give you the lowdown here, but I should at least credit its creator, Clayton Christensen.

I probably first heard about JTBD from following Basecamp’s Ryan Singer on Twitter, and downloaded a podcast that featured his smart thinking.

Something that really resonated was when he railed against personas.

Personas (you may call them profiles, or something different) are pretend customers you concoct, who then use your product in a particular way, giving you some focus on a particular element of the product experience.

I can’t quote Ryan from memory, so this is less eloquent, but hopefully you’ll get the idea:

Personas will tell you there are different types of pizza buyer: The older couple who earn a comfortable wage and enjoy going to the posh italian down the road. And the younger couple who stay in to watch Netflix and order a pepperoni with extra onions. But that’s nonsense; they’re the same couple with two different jobs to be done: one is to celebrate their anniversary, the other is to avoid cooking after a long day in the office.

Again, none of this is particularly difficult to understand, but the more you dig into it, the more you realise just how powerful this stuff is.

I’d reached this point, saved the post as a draft, and had every intention of finishing it a later date. And then the following day, by pure coincidence, Ryan tweeted this image: 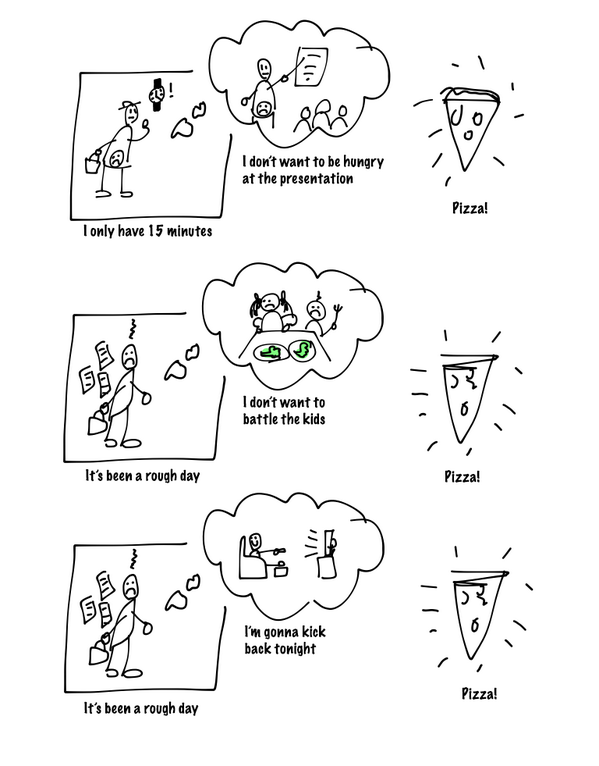 And then a few days after that, Ryan posted a link to this interview he did with Samuel Hulick at User Onboarding, which again features the pizza example, but this time with all Ryan’s incisive clarity.

And I think these resources provide more value as an intro to JTBD than anything else I could note down here.

I’ll probably write more about JTBD in the future.

It was supposed to be so easy. Just find a market ripe for disruption, build a product that makes people’s lives easier, and knock on the digital doors of everyone who might use it. The simplicity of the startup dream is what makes it so... Continue →